The March of Ignorance

Last Tuesday, during the Sukkot holiday, thousands of Jewish Israelis thronged through the streets of the capital in what is known as the “Jerusalem March,”  an annual tradition organized by the municipality of Jerusalem. Youth groups wear their distinctive emblems, workers from major companies don their employers’ logos, and families, seniors, and many others try to outdo one another with marching verve and enthusiasm on the streets of the capital.

Marchers walking at the “Emek Zurim” park down the hill to the Palestinian neighborhood of Wadi Jos.

Usually the route of the march goes through sites in and around  the western part of Jerusalem, and ends at a gathering in one of the city’s central parks. However, in recent years a new route has been added to the march, one that passes through parks and historical sites in the Palestinian neighborhoods of East Jerusalem.

For most of the participants, it is just another normal organized tour around some of the city’s most  interesting and important sites.  For many of the city’s Palestinian residents, however, watching the thousands as they walk and sing is a different experience altogether.  Police are virtually everywhere, positioned along the length of the route, and closing roads to ensure the security of the marchers.  The result is yet another manifestation of how Jewish sovereignty is asserted over Palestinian sections of the city.

I know that some of you might be surprised that I am “accusing” an innocent public sports activity of being political, but when you look at the context, it becomes very clear.

The Old City and its surroundings are like the volcanic core of the conflict. All of the national, historical and religious components of the Palestinian-Israeli conflict can be found together in this small area. Every movement here is sensitive. For decades, Jewish settlers have been trying to forge a significant presence in the Palestinian neighborhoods in and around the Old City, the goal being to prevent compromise in Jerusalem. They know, however, that this cannot be achieved only by heavily-protected houses settled by a few families; this presence will only be significant if the masses, the average Israelis, the mainstream, will somehow take part in it. If the settlers can bring other Israelis to visit those areas and to connect with them emotionally, then it will be much harder for the Israeli public to give up Israeli control over those parts of the city as part of a compromise in Jerusalem. This is why many of the settlers groups have started, in recent years, to invest in tourism projects in the Palestinian neighborhoods of East Jerusalem.

And indeed, the settlement of Beit Orot, in the Palestinian neighborhood of A-Swane, invited the participants of this year’s march to join a Sukkot festival as part of the attractions of the march. 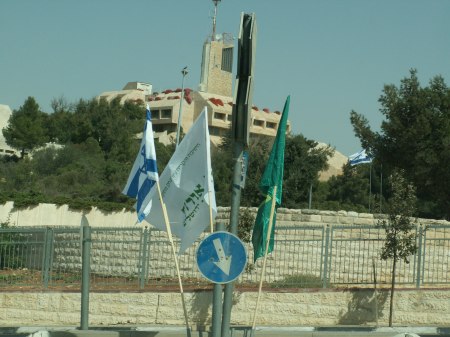 The flag of the Beit Orot Settlement, together with the flag of the National Parks Authority and the Israeli flag at the route of the march.

The “Elad” settlers group, which actively promotes Jewish settlement in the East Jerusalem neighborhood of Silwan, seems to be one of the sponsors of this year’s march, as its logo adorns the municipality brochure and signs along the way.

A sign for the “Jerusalem March” with the logos of the Municipality, the Parks Authority, and Elad

The logo is not hidden; apparently no one in City Hall sees any reason that a controversial settler group should not be an official sponsor of a municipal event.

It is likely that very few of the participants were aware of this connection. The march has been part of the Sukkot holiday landscape for many years, and mainstream groups such as the electric and phone companies, certainly not political organizations, have always sent delegations to participate.  Just as in many other areas of our country’s life, politics have encroached slowly but surely into tourism, and have turned “innocent” events into ones with a message of expansionism and exclusion.

No Palestinians are invited to join the Jerusalem March, nor would they be welcome.  In fact, some of the main roads in East Jerusalem were closed to cars in order to ensure the security of the march.  In West Jerusalem as well, there were roads closed when the march passed; however, in Silwan the police stopped Palestinian cars, while cars driven by Jewish drivers were allowed to pass!  A policeman explained: “they are not a threat to the March”.

No mention is made anywhere that participants will be marching through areas of controversy, even as this year’s march followed by only days the killing of a Palestinian resident by a private guard of the settlers in Silwan, which led to an outbreak of violence in East Jerusalem. In fact, the march was to have passed right through Silwan, at the very site of the killing.

This area suffers from a severe Dr. Jekyll and Mr. Hyde syndrome inIsraeli public discourse. The route of the March should have gone through what the settlers call “the City of David“, a historical Jewish site near the Old City. The very same area, whenever there are clashes or any other negative news, suddenly becomes known as the “Palestinian neighborhood of Silwan“, as if it were a different place.

Eventually the route of the march was altered at the last minute to avoid potential conflict. Instead of marching through “the City of David”, the organizers decided to avoid passing through “Silwan” and bypassed it with an alternative route. 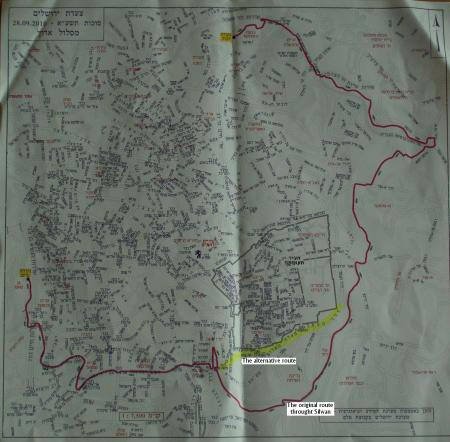 The map of the march with the route change

Yet perhaps only a handful of participants were even aware of the reasons why.  Conflict and controversy are hidden from view; in the eyes of the marchers, they are innocently marching in historic parts of Jerusalem, unaware of the fact that those same areas are the heart of the conflict and dispute.

Instead of approaching the city as a key to a possible solution to the Israeli-Palestinian conflict, the municipality and the authorities knowingly invite thousands of holiday visitors to join in their particular, exclusionist vision of Jerusalem. In order for Jerusalem to be a real City of Peace, we must acknowledge the fact that there are two peoples living here, and that  historical sites cannot be separated from the present.

This entry was posted on Tuesday, October 5th, 2010 at 8:15 am and is filed under Uncategorized. You can follow any responses to this entry through the RSS 2.0 feed. You can leave a response, or trackback from your own site.

One Response to The March of Ignorance